Stormy Sixties covers 50 matches over the period from September 1960 to October 1969, in 288 pages, again based on contemporary reports.

Still Crowing (buy here) is the eagerly awaited follow-up to When The Cock Crowed, which chronicled the fabulous story of France's national rugby league team's odyssey from first match in 1934 to last game on the epic 1951 tour of Australasia.

Still Crowing takes up the story of the next 62 matches, from November 1951 to August 1960, in 350 pages, again based on contemporary reports. Lavishly illustrated with over 400 photos, with selective pen-pictures and full statistics, this is the definitive history. 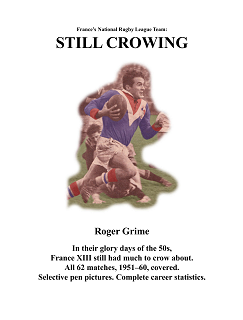 When The Cock Crowed

When The Cock Crowed (buy here) is a 320pp book which chronicles the remarkable journey of the French international rugby league team from Jean Galia's 1934 novices to Puig-Aubert's 1951 World Champions.

Based on contemporary press reports, with over 270 photos, full statistics and selective pen-pictures, this is the definitive history. 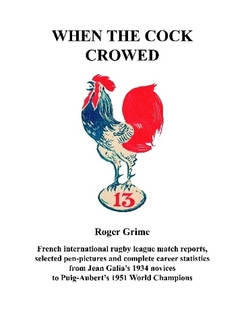